August brought on a lot of emotions.

August marked the month that we had a miscarriage 2 years ago.  I was only 5 weeks a long...but the fact is, we have been wanting a baby for what seems like sooooo long, and the fact that I was so close 2 years ago...

August marked the month that we would need to update our home-study with DPAS.  Most of my Adoptive Mama friends don't make it to this point because they are matched and celebrating their beautiful little miracle long before this.  A home-study is required each year that you are "waiting," and since we were still "waiting" we had to update ours, which in turn meant more money and more waiting.

On the morning that we were scheduled to have our home-study done, August 9th, we got a call from DPAS.  I assumed it had something to do with our home-study, but I was wrong.  We had been selected, again, by a birth mom.  I initially thought, "YAY!!!!....here we go again...YAY YAY YAY!  When will this one fall through?  YAY!!!!!!"  Chad and I were excited but guarded.  We were happy to find out she was due on August 28th!  We thought, whatever happens, at least we will know this month.

We met with the birth mom S on August 13th.  What a beautiful girl on the inside and out.  We immediately fell in love with her.  I just felt a connection but tried not to get my hopes up.  She was just wonderful--I seriously can't say enough nice things about her.  She even brought us a stack of pictures of the ultra sounds she had printed off herself, along with pictures of her and the birth father, Z.

We decided to keep this match and meeting a secret this time around from Chalin...he kind of took the last disruption in June a little hard....and I couldn't watch him go through that, again.

Chalin started his first day of Pre-K on Friday, August 17th, and he loved it!

We got a call on August 20th from DPAS that S was in the hospital ready to deliver!  She went into labor 8 days early!  The original plan was for us not to go to hospital at her request...we were surprised, nervous, and excited when we were invited up to meet the birth father Z and the/our baby.  Z was having a hard time, but he said once he met us, he fell at peace and knew they were making the right choice, even though it was a very difficult one.

We walked into the hospital room on August 21st, and immediately S handed sweet baby girl to us.  She had the most beautiful skin, sweetest little ball chin, cutest button nose, and most precious little lips.  We spent the next 2 hours holding this beautiful baby girl, hoping and praying she would be ours forever and visiting with 2 of the most selfless people we will ever meet.  I remember leaving the hospital thinking, "What did we do to deserve these wonderful birth parents who chose us to parent the most beautiful baby girl in the whole world?"  I was in awe.

Most seem to have a really hard time leaving the hospital, but I left feeling at peace.  I knew whatever happened that next day, God was going to take care of us.  I also knew that the following day was going to be tough.  Man, did I have no idea...The following day, August 22nd we went back to hospital to bring baby girl home.  That day will mark one of the most difficult days I have ever endured.  The thing, the moment, the day that would be bringing us so much joy and marked as a very special day for us, would in turn mark one of the most difficult (if not the most difficult) days for S and Z, along with their families.  Our hearts were so heavy that day.  We had to put our complete trust in God--knowing that he had this perfect plan all along for us, for them, for our sweet baby girl.  That it was His plan to bring our sweet baby girl into this world, through S and Z.  It was His plan for us to be her parents.

I could go on and on and ON about our sweet baby girl's birth parents, along with little details here and there about our adoption story, but my words will never do them or this very special story justice.  They do and will always hold a very special place in our hearts, and Carinne will always know how much she is loved by us and by them.

The days came and went and both S and Z followed through with terminating their rights.  S terminated her rights about 8 days after Carinne was born and Z had until September 5th....the next few weeks were filled with joy, little sleep, and stress while we waited for both birth parents' rights to be terminated.   Looking back, I think deep down, I knew it was going to work out this time.  I just had a peace about this situation (although I won't deny the crazy person that I allowed to come out during those few weeks!  So very thankful for family and friends for their patience and prayers during that time!)

We have had a couple of meetings with S and Z so far, and they have both gone great!  We do have an open adoption and will for as long as they want.

Thanks to my sweet friend April for capturing this picture of our little miss Annabella "Carinne".  Annabella was the name S and Z chose--and we wanted to keep that name.  It's a beautiful name for our beautiful girl.  Chad and I chose Carinne (pronounced Kah-rin, but no pause), because we wanted a unique "C" name, just giving her another way to fit into our family perfectly.  She was born at 12:18 PM, 18.75 inches long and 6.6 lbs of pure sweetness.  More updates over the last couple of months of our new family of 4 coming "soon"...... 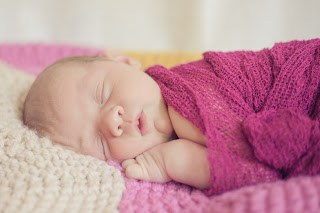 Lindsay
Oklahoma, United States
I am a jesus lover and follower. a wife. a mother. a knitter. a runner. a reader. a bargain shopper. and a vintage lover.

Please check out my Scentsy page! All proceeds will go towards the expenses of our Adoption. Thank you so much for your love and support!